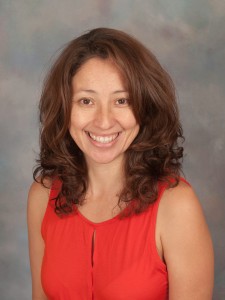 “Every day I learn as much from the children as they learn from me. They are pure instinct and teach me so much about humanity.”

Originally from Guatemala, Silvia pretended to be a schoolteacher as a child, encouraging her friends to be students and assigning them homework. As an adult, she pursued her love of teaching and worked at a dual Spanish/English immersion school in the Kindergarten and third grade classes. She ultimately became the director of their English Department.

Silvia moved to the Bay Area in 2008 and immediately discovered the KSS program; it was a dream come true for her.

Silvia worked her way through the KSS network; first in an after-school program in Walnut Creek, then as a teacher at the Walnut Creek and Oakland branches of KSS.

In 2011, Silvia and her team launched KSS Berkeley, and she’s been leading as director ever since.

Silvia believes in the value of a curriculum in preschool, yet emphasizes the importance of responding to children’s needs and interests. “If we’re focusing on shapes in class but one of the students recently saw a bat, all the students want to talk about bats. I try to incorporate the current interests of students into my lesson plan and be as flexible as possible.”

Now, after a nineteen-year career as a bilingual and immersion teacher, Silvia still loves every minute. And KSS is a family passion; Silvia’s daughter attended KSS Walnut Creek.